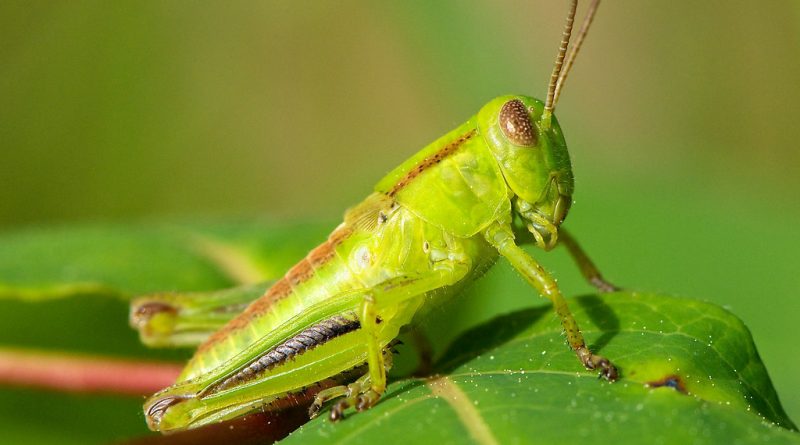 Above: Our grasshoppers, such as this Differential Grasshopper, are consuming more plant material but fewer nutrients. Photo: Jackanapes

This is the fifth article in a series about climate change impacts on various ecosystems. To read the other articles in this series, click here.

Growing up, I often heard the phrase an apple a day keeps the doctor away. As a kid, I envisioned a doctor reacting to an apple like a vampire does to garlic. As I grew older, the phrase made more sense, in that an apple provides many important nutrients to keep me healthy. As I grew even older (and started having to shop for myself), I started wondering which apples are best. There are shelves full of different apples — surely, they aren’t all exactly the same nutritionally. I don’t want to eat a Red Delicious apple when I should be having a Granny Smith, or a Gala, or a Pink Lady.

As far as humans are concerned, the apple variety doesn’t much matter. Any apple is better than no apple. In nature, this isn’t quite the case, particularly for smaller animals that need more nutrition from a smaller amount of food.

Ecologists are beginning to recognize a problem that agriculturalists have flagged for years: plants are growing faster and bigger, but lower grade. By weight, modern crops and grasses contain less important minerals than they did throughout history. This is a phenomenon that has been observed in agricultural settings (e.g., Kuehny et al, 1991) and natural settings (Ziska et al., 2016; Welti et al., 2020), but perhaps best observed in tallgrass prairies (Welti et al., 2020).

Nutrient dilution is an unexpected impact of climate change, caused by a climate variable often forgotten: carbon dioxide. A common climate change reduction strategy is to plant trees, since trees take carbon dioxide out of the atmosphere to store within their own tissues. All plants do this. The problem, though, is that carbon dioxide produces nutritionally-void carbohydrates, limiting the plant’s uptake of sodium, nitrogen, phosphorus, and potassium. In turn, herbivores are deprived of important elements and nutrients. Imagine eating only white bread all day every day — filling, yes, but you will not feel very well after a while. As the amount of carbon dioxide increase in the atmosphere, so does the carbohydrate fraction in the plant material (Welti et al., 2020).

In a tallgrass prairie in Kansas, grasshopper abundances have been declining at a rate of 2% per year since the 1980s (Welti et al., 2020). Over the same time period, grass biomass doubled and nutrient concentration decreased by up to 90% (sodium, in this case; Welti et al., 2020).

A study from 2016 was one of the first to explore the impacts of nutrient dilution beyond the agricultural world. Scientists assessed historical Canadian Goldenrod specimens from the Smithsonian Museum from across USA and Ontario and fresh samples from Maryland and Texas. The findings were stark. Available protein in pollen decreased by about one-third between 1842 and 2014, most markedly between the 1960 to 2014 period (Ziska et al., 2016). The amount of pollen protein was closely connected to increasing carbon dioxide in the atmosphere and increasing carbohydrates in the plants (Ziska et al., 2016).

Dominant plants in our grassland ecosystems — grasses and goldenrods — are important to their ecosystems as the foundation of the food web and key support for soil health.

Late-blooming flowers, including goldenrods, are an important food source for bees and other pollinators before they enter their overwintering stage. When these flowers are less nutritious, there are clear impacts on the overwintering survival of the insects. Similarly, insects that feed on grasses, like grasshoppers, develop more slowly and less healthfully.

Some insects may simply try to eat more plants to account for the decrease in nutrients. There is more grass available, after all. In doing so, they risk eating simply too much, and eating toxic plant compounds or metals that are not diluted in the feed.

Nutrient dilution is a relatively recently explored climate change impact and has yet to be understood enough to fully comprehend what could cascade from it in the future. The relationship between nutrient dilution and the annual weather doesn’t help much. Since nutrient dilution is caused by increased carbohydrate production, years when carbohydrate production is slower is more beneficial for the ecosystem. Wet and hot years tend to have the most nutrient-diluted plants, whereas dry and cool years have more nutrient-dense plants (Welti, et al., 2020). This is important because it may drive insects to flourish more in drought conditions, which would further stress the vegetation. It could be a very real possibility that drought plant stress will be combined with increased insect defoliation to severely impact grasslands and prairies. Yet, during wet years, there may be enough plant growth to compensate over the long term.

Additionally, there are questions concerning how nutrient-diluted plants contribute to soil health through decomposition. It could happen that the carbon-rich plants decay slower, holding carbon out of the soil. Fungi and lichens may benefit with the plentiful leaf and plant litter, though growing plants will eventually be starved of soil carbon and the overall soil health will diminish.

An apple a day keeps the doctor away, but if you’re a grasshopper or bumble bee, some apples are definitely better than others. 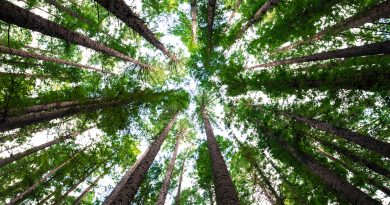 Many Small Steps Can Leave a Big Footprint 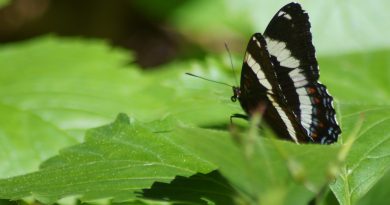 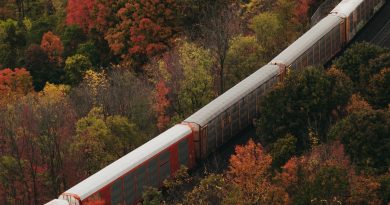